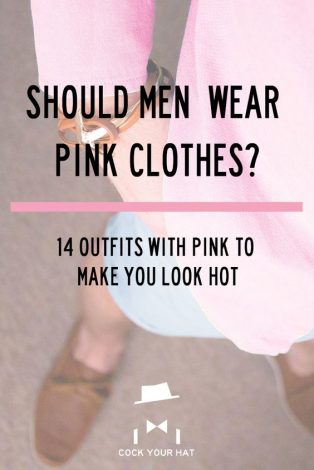 In summary, pink works great on a man. It’s such a versatile colour and can pair with almost anything in your wardrobe. Women love pink! It’s a sign of confidence that’s extremely attractive. Read on, to find out how you can look great in pink too.

It didn’t occur to me, until recently, that men wearing pink would be an issue to other men – until a guy belittled my fashion advice because in my avatar I can be seen wearing a pink oxford shirt.

That got me thinking. What do other men think about wearing pink? I wanted to know if they wore it and especially wanted to hear their opinions. So I posted a question to my peers.

Here’s the result. 100% of the replies were from men. 74 people like wearing pink, 7 love to wear pink and the thought of wearing pink makes 2 men extremely angry.

I personally can’t quite fathom why wearing pink would be disliked so much by another man, especially one on a quest to have better style.

But here’s why you should wear pink and why some men may not like it.

Pink is a tremendous shade of colour to pair with almost anything in your wardrobe. It is so versatile and most importantly, it looks great.

I did also ask my friends what they thought and one said:

From a female perspective, a man in pink looks very nice indeed! <3 my fav colour!

In my attempt to research this matter a bit more. I’ve found countless videos from women talking about the clothes they love men to wear. Every single one of them mentions pink!

Pink is sexy on a man! Pink is HOT! Pink oozes confidence.

I think this is where the issue lies with other men. Since there can be two different ways to dress; dressing to attract and dressing to express your status. Some men feel threatened when you look too attractive, I guess. Kinda stupid.

I’ve put together a collection of some awesome looking guys all wearing pink via some form of clothing. So here are some ways to wear pink.

If you’re still wondering if you should wear pink or not (and the answer is yes) here’s a little history lesson.

Back in the day, when Queen Victoria was kicking about, she had a boy called Albert, who she dressed, in a dress. You see, back then, it was gender neutral and a baby wearing a dress made much more sense. It still does! Far less damage after explosions. And when they wore dresses, they were white – because white can be bleached.

Were we just so much more intelligent back then?

To jazz up the white dress Victoria did so with a pink ribbon. Pink is a shade of red, which symbolises power, youthfulness, and innocence, so, therefore, was a fine choice for a young prince.

It wasn’t until the 1950s that we started to feel this urge to instantly know the sex of a baby upon first glance. Prior, babies were just babies and clothes were unisex. Boys wore dresses up until the age of 6 or 7 when they had their first haircut.

The notion of wearing one particular colour started to evolve but not like we know today. Blue is a calming colour was associated with women, and pink being bold was associated with men. Interestingly, this is where the purpose of wearing ‘something blue’ comes from at a wedding – because it’s calming.
This colour divide was not a universal consensus at this point like we’ve been brainwashed into thinking now. It wasn’t until commercialism had its way that the colours started to flip.

Companies thought they could sell more products if they could marginalise them based on sex. Therefore if you had a girl after a boy, you’d have to go out and buy an entirely new wardrobe. $$$ Cha-ching $$. Oh, you’d also need to paint the room a particular colour as well. (Buy them new bike, new scooter, electric car, football etc etc)

We are so indoctrinated into thinking the way we do base on media input that we can no longer form our own opinions. It’s like we are robots of a regime, peddling a message to bolster someone’s propaganda.

I think the moral of this post is to dig deeper within your mind to reach for feelings that you know are your own and not someone else’s and of course, that pink looks bloody fantastic on a man!